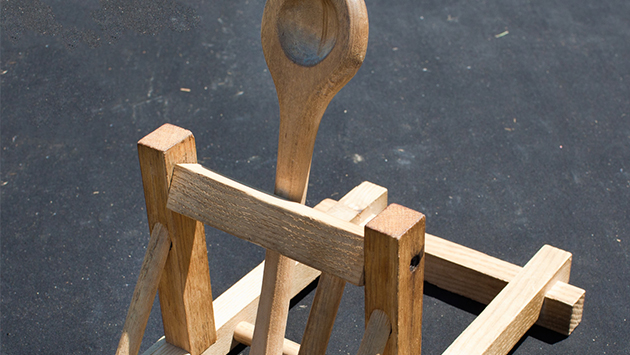 One of the seven leading causes of depression and anxiety cited by Johann Hari in his book, Lost Connections, is the loss of connection or engagement at work.

It’s like our organizations are made up of the living dead. Maybe that’s why zombie movies are so popular?

Sometimes it’s hard for leaders to understand why staff are so disengaged. To get at this problem, I designed a training program for a group of manufacturing leaders in which I simulated their actual work environment and had them play the part of the worker.

I used table-top catapults that shot plastic golf balls to simulate the manufacturing process. Each catapult sat on top of a table and was operated by two workers—one loaded the catapult and the other one shot it.

They had their SOP’s (Standard Operating Procedures) they needed to follow, as did the operators in their plant. (It was a pharmaceutical operation and so SOPs were critical.)

They were trained in what they were to do and then they began winding the catapult arm back and shooting golf balls at the target that lay on the floor.

The “Analytical Department” was responsible for assessing if the target was hit and the results were reported up through the hierarchy of Analytical.

This created the very situation that occurred in the plant, where workers had no idea if they were succeeding or not. They just went about their work blindly.

And so the game began. The leaders playing the role of the worker were enthusiastic at first.

How fun is this? Go to training and shoot golf balls! It was an engineer’s dream.

But quickly, the disengagement set in and they slouched down in their chairs and moaned and groaned.

“When is our break coming up?” They asked—just like the operators in their plants did. They were bored and disgruntled.

People like to play games. They play them for free, in their free time and they invest a lot of energy into them.

I bought a couple of board games recently—one is called Robinson Crusoe. The rulebook is 38-pages long! It took me two hours just to organize all the parts. This is a popular board game and one that takes considerable study to even start to play.

Why not tap into that engagement at work?

If you want engagement, you have to give people something to engage with. There needs to be a goal—one that they care about reaching.

And that goal has to be achievable. We know from game design that if the game is too hard, most people quickly opt out. If it’s too easy, they get bored.

People like to get better at something. They want to master something, and they want to need to work in a safe, collaborative environment.

We refer to this environment as a “culture of success.” What that means is that you set people up to succeed, to win.

Everyone wants to win. That’s one of the main reasons they play games. But in an organization, that game needs to be cooperative, not competitive. Competition within an organization engages a few, but not the many.

Organizations are driven by teams, not individuals.

Think about a basketball team and what happens if the team members on that team compete with one another. They aren’t going to win many games.

After round one of the catapult game, when the leaders really understood what disengagement felt like, we changed the rules. Same targets. Same golf balls. Same catapults.

But now they could cooperate to make the whole process work more smoothly. They could suggest changes. They would get feedback on how the system was working. (The catapults were linked together and balls had to move from one to the next to create a simulated production line.)

And we added another twist: Just-in-Time production. That meant that the customer wanted a golf ball every minute instead of 30 at the end of half an hour.

Suddenly the whole room exploded with enthusiasm. They were engaged! They wanted to be successful. They were having fun. They wanted to win and they did. They completed the mission and we had achieved our simulated culture of success.

Creating and increasing engagement requires you to change some of the rules about how work is designed and how teams function.

Think About the Work as a Game

How is the game being played now? What are the rules? How can you redesign that game so that it’s more engaging, more fun for the people doing the work?

That’s one of the jobs of leadership–make the work fun. And who doesn’t want to have a job that’s fun every day?

But fun isn’t about being able to play ping pong at work. Fun is about getting the work done in a way that is challenging and engaging, which creates a sense of mastery and success.

Change the way the work is done and your employees won’t be continually posting on Facebook about how much they dread Monday and can’t wait for Friday to come around. Get them engaged and they will want to work. They’ll have more fun and be more productive.