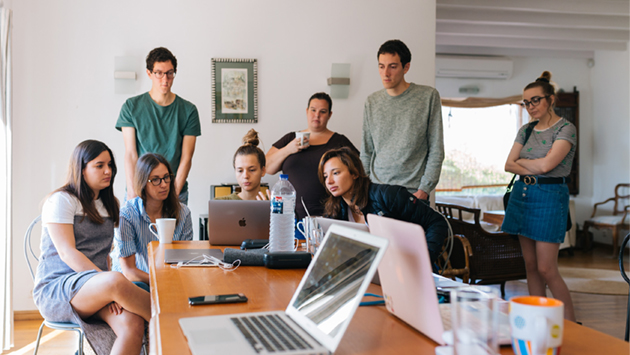 You’ve probably been leading from the top of a cliff for most of your career. That cliff is named directive leadership and it is built up of all sorts of systems, skills, tools, behaviors, and so on.

Before you even became a leader, the role models you had were all directive leaders.

And, they micromanaged you; yelled at you; reprimanded you. They got away with this because they had authority over you – they had more positional power. The VP told the director what to do. The director told the manager. The manager told you.

And then you became a leader and so that’s what you did. You now had some positional authority, and you weren’t on the lowest rung of the hierarchy anymore.

You took some management courses. They taught you how to plan, budget, delegate, allocate resources, etc. You might have also taken some leadership programs about how to get people to follow you.

You’re supposed to be out front and everyone else is lined up behind you.

That Won’t Help You Now

None of that is exceptional leadership, because as its core, it dishonors and disrespects people.

It’s all run of the mill, old paradigm, hierarchical leadership which is about using one’s power to control other people.

But guess what – not only do people hate being controlled and they perform suboptimally when they feel like you’re trying to control them, but it’s also the case that you can’t actually control anyone else.

They let you control them because you and the organization behind you (the performance ‘management’ system for example) set it up so they have little choice if they want to keep their jobs.

Their motivation is fear, and as Daniel Pink points out, knowledge workers perform worse when the driver is fear.

And let’s face it, unless you’re a psychopath, controlling people using fear isn’t a lot of fun for you either.

But there is another way, one that is engaging and fun, for both you and the people you work with, and that is shifting to a collaborative approach.

A Collaborative Approach Is at the Core of Exceptional Leadership

Very few leaders even know what true collaboration looks like, let alone how to lead it.

Let’s look at what most people think of as collaboration:

Suppose you’re a project leader and you want to involve your team in the work of planning out how the project should be done. You want individual team members’ inputs. And so, you seek out each team member and get their inputs about what they will be doing on the project, how much time they will need to complete their part of the project, what it might cost, etc.

Then you go back to your office and crank up your computer and compile all the information you gathered into a Gantt chart (schedule) and a budget.

After you’ve got everything figured out, you call the team back together, hand out copies of the plan with each of them, and go over the assignments you’ve compiled.

Does that sound like the kind of collaboration you’re used to?

I hate to break it to you, but that’s not collaboration at all.

The project leader facilitates the team through the steps of each tool and the team makes the various planning decisions. They figure out who will do what, how long it will take to complete each step, how much it will cost, etc.

Both the project leader and the team members monitor the dynamics of the group, making corrections as needed to maintain group cohesiveness and to stay on track for creating the project plan.

When the team completes the planning, the project leader compiles their work into a plan that she uses to negotiate with the rest of the organization as to what the team can and cannot commit to.

In true collaboration, the team is the entity that is making the decisions, solving the problems, creating the plan, monitoring how things are going versus the plan.

The leader is primarily a facilitator. That means that the leader has to be skilled at facilitation and the team members have to be actively involved in making decisions, solving problems, creating plans, etc. It is through this team participation that issues are resolved, understanding is built and buy-in is created.

Collaboration is all about building engagement which in turn creates commitment.

So, let’s suppose this sounds appealing to you:

But How Do You Get There?

How do you jump off that cliff and land safely in the land of collaborative leadership?

The tools you learned as a directive leader won’t do the trick. You’ve got to build yourself a new toolbox. You need new tools, skills, behaviors and new rules to play by.

You can’t just leap without a parachute to get you safely to full team participation.

Believe it or not, the best place to begin is by learning the project leadership toolbox because by default, project or initiative leaders (and you’ve probably been asked to lead an initiative or two in your day) have to lead without authority.

They can’t control their team, and so they have to learn how to facilitate, how to lead a team through a planning process, how to have the team make decisions and solve problems. These are all tools you can use in everyday work.

Being an exceptional leader starts with being a collaborative one and that requires a whole new set of skills and behaviors.

How ready are you to take the leap? There’s a brave new world at the bottom of the cliff.