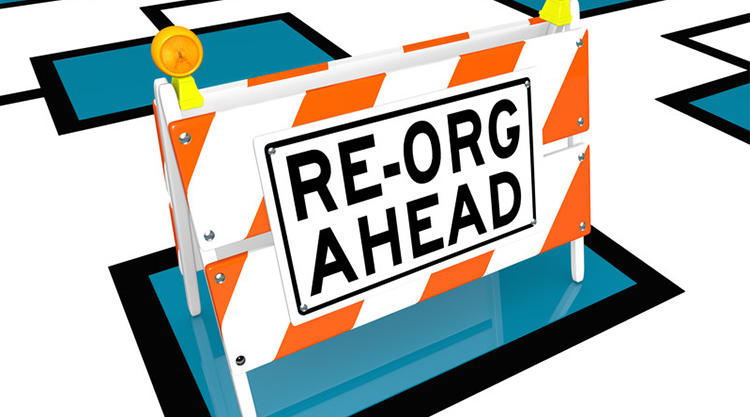 When an organization is looking to improve organizational effectiveness, they pick up the phone and call a big consulting firm, and upon their advice embark on a major restructure.

The company restructure is a popular tool among CEOs (and big consulting firms), especially in the first two years on the job with varying motivations such as strategic growth, cost-cutting, creating better alignment with customers, and more, all with the goal to achieve better performance.

But that’s usually not the result.

A recent Bain & Company study of 57 major reorganizations found that fewer than one third produced any meaningful improvement in performance and in some cases, it actually destroyed value.

Moving the boxes around on the org chart (which is what a restructure really means), is a shell game. First, we move all the engineers into the plants to align them more closely with their customers (effectiveness) and in the next restructure, we move them all back into a central engineering group to save money (efficiency) and ensure technical excellence.

Back and forth. Centralize, decentralize.

Companies today are not one dimensional. Therefore, designing a system created over 40 years ago simply won’t create more operational effectiveness in the modern company.

In addition, restructures are slow, costly, and cause more problems than they solve.

For example, a prospect recently called us after going through an 18-month restructure initiative (we’ll call them Company X).

Company X announced that they were going to restructure. Sales and other functions that used to be part of the business units were centralized, and business unit leaders would no longer have all the parts of their business within their span of control.

But now, they were going to be a matrix organization (they already were).

When they turned to the consulting group for help, they were gone. (Apparently operationalizing the matrix structure wasn’t part of the contract.)

They had already spent millions on consultants to work with senior leaders and internal staff. But by far, the biggest cost was opportunity; what could have been achieved during the time all this restructuring was going on but wasn’t because the organization was focused on moving boxes around yet one more time?

They’re now working on putting it back the way it was before.

In most restructure initiatives, operationalization isn’t part of the planning, so the organization is thrown into complete chaos, often for several years.

All of this can be avoided.

When it comes to cutting costs, creating better alignment with customers, and taking advantage of new opportunities, today’s organizations can no longer be thought of as one dimensional (the dimension on the org chart for those playing along).

Moving boxes around on the org chart is completely unnecessary in most cases, so my best advice is that the next time you’re feeling the desire to restructure yet one more time, STOP.

Instead, organizations should concentrate on treating the systemic issues that lead to ineffectiveness. In other words, attack the root causes.

Back to Company X

After completing restructure, we come in with a goal of helping them operationalize their structure.

Mostly, we’re helping them deal with the “What do we do now?” syndrome but we also needed to reconnect all the pieces that they had previously sliced.

One of their leaders was stuck on the fact that sales had reported to him in the past, and now that they didn’t, he couldn’t understand how he could be accountable for driving new revenue without direct reports.

After examining what actually happens from start to finish in serving the customer, the conversation shifted. (Although in the beginning, he kept referring to the org chart boxes.)

“Let’s not worry about the boxes for now,” I said, “Let’s worry about how things happen and how you serve your customer.”

Once he got focused on the work stream and not the chain of command, the conversation got interesting.

He finally said, “Oh! This isn’t about where people report to. It’s about getting the job done across the organization.”

That’s exactly what I wanted him to see; that it didn’t matter where sales sat in the org chart, it still was part of the process.

Nothing had really changed, except sales now reported to someone else —but he relaxed a lot because he realized that the work hadn’t changed. All we had to figure out now was how to engage all the stakeholders that were part of the process to drive that line of business.

When leaders can actually let go of the need for direct reports and look at other structures such as horizontal steering teams and work teams to pull people together, they realize that they now have a process that’s much more agile for their business than moving boxes around on the org chart.

So Why Do CEOs and Large Consulting Firms Continue to Recommend Restructuring?

Obviously, there’s big money in restructuring. And because it’s a sledgehammer approach to solving a problem, it shows big time movement to a board of directors that change is happening.

It can also be that the sledgehammer is the only tool they know about.

I’m sure that consulting firms will continue to sell this approach. In fact, McKinsey’s website currently says, “We suggest a better way: companies should start any cost-cutting initiative by thinking through whether they could restructure the business to take advantage of current and projected marketplace trends.”

I guess I can’t complain. You can always call us to come clean up the restructure mess.

But it’s always better when we can attack the root causes of the problem first and avoid the chaos.