Home » Matrix Management Magazine » Collaborative Leadership » How Do You Ignite Fear in the Hearts of Hierarchical Leaders? 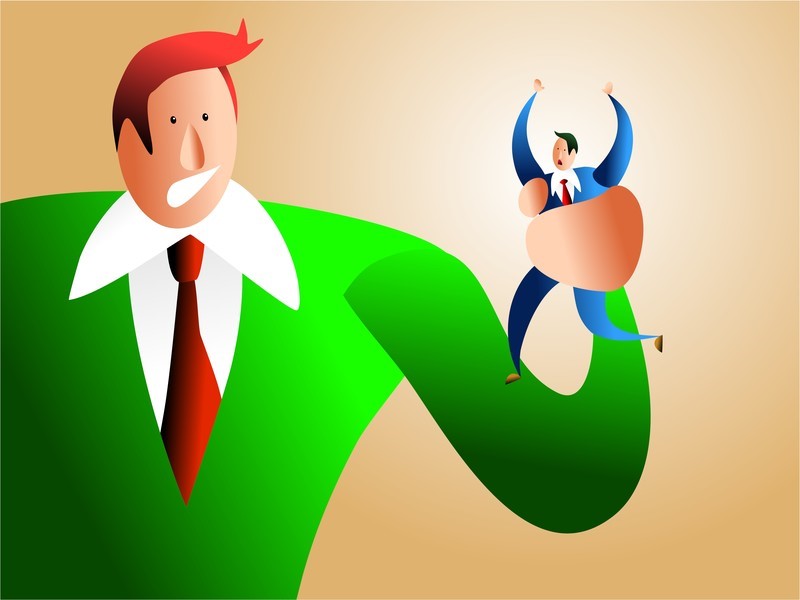 You know the type.

They’ve fought their way up the career ladder and are holding on for dear life.

Let’s be clear. These leaders are not empowered. Instead, they draw power from the positions they hold, not from their core selves.

Such leadership comes not from their true expertise—nor from the desire of people to follow their direction.

Even though Peter Drucker formalized the model in the 1950s, it actually dates back to the early 1900s. At that time, workers were largely uneducated, and many spoke very little English. They were treated like machines, particularly by the father of modern management, Frederick Taylor.

This idea that people operate like machines continues today, in our so-called modern era.

How much time is spent trying to make people more productive, to make them work faster or smarter?

But people aren’t machines. They are living, creative human beings, who want to find meaning in their lives and who want to contribute to something larger than themselves.

They will work really hard in the right environment. And they will punch a clock in oppressive environments where leaders are trying to control them.

Actually, people don’t need someone to manage them, to set performance goals for them, or to do performance reviews for them. What they do need is clear organizational direction, mentoring when they take on a new role, and a support system to help them solve problems they can’t address on their own.

The hierarchical operating system that most organizations use to run their businesses is based on the old idea of power, where power is closely held by a few individuals and wielded over others. Each rung of the ladder has more power than the lower rungs. People claw their way to the top, accumulating more direct reports to increase their span of control.

This journey increases their value to the organization in the hierarchical operating system; they get more pay, more rewards and a “better” title as they gain more power over others.

This system also counters the direction the world is going, which is toward new power, the power of groups, of egalitarianism. Millennials, in particular, balk at this outdated power dynamic because it doesn’t serve them.

They are right. It’s time for a change.

But how do you wrest power from those who cling to it so tightly?

That’s a question we have been asking at the Matrix Management Institute for some time. How do you shift out of the hierarchy?

(And don’t fool yourself. Dual reporting doesn’t take you out of the hierarchy; it inflicts two old-power bosses on an individual, which only makes matters worse.)

Rather than taking on the entire dysfunctional system, we focus on what can we provide to individuals, whether they are professionals or leaders, that will help them cope in the oppressive environments they find themselves in.

We offer a series of programs on leading without authority, and the first course covers what it means to be an empowered adult. The class helps participants shift from trying to control others and look at how they can best manage their own “sphere of control,” which is an internal sphere.

People learn how to act like an adult, instead of like a child or a victim, and how to treat others with respect.

You’d think the subject matter would be pretty innocuous, but you’d be wrong, just as we have been wrong. This program ignites fear in the hearts of the most hierarchical of leaders, the ones with the most control.

I’m old enough to remember the empowerment fad of the 1990s, when everyone was asking: How do you empower your direct reports?

That particular movement had a lot of stupid nonsense, it went nowhere. To summarize the movement—with apologies to the source, whom I cannot name—empowerment was “what the top wanted the middle to do to the bottom.” Senior leaders wanted workers to be able to stop a production line if something was wrong, but they didn’t want to give away any of their own power.

The whole thing was a joke.

In truth, you cannot empower anyone else; you can only empower yourself.

Even so-called leaders today are not empowered, and this fact goes beyond the leaders in the middle. I had spent an entire day with a vice president of human resources for a banking chain, educating him about a new operating system model for his organization and discussing workforce empowerment.

Then, the topic changed to a leadership summit he was planning and what topics might help move the organization toward greater employee empowerment. We discussed several topics that would help him achieve the goals he had set during the day, but he couldn’t change the agenda, even though the meeting was six months away.

Because his boss, the CEO, had set the agenda. “And you’re not empowered to change the agenda or to go back and discuss a different direction with your boss?”

“No,” he said sheepishly. They had no hope of empowering their workforce if a vice president couldn’t even empower himself.

Is the Organization Really Ready?

Another hierarchical organization hired us to conduct training in leading without authority. Based on initial discussions with the training directors, we advised going in another direction, but they insisted this was the right program.

We started teaching their mid-level leaders about empowering themselves.

The leaders loved the program and felt it was highly useful. After we’d trained a hundred or so people, senior leaders got a whiff of what was going on and shut the whole thing down for fear that someone might challenge their orders.

They worried that their direct reports might start acting more like adults, less like obedient children. They just weren’t ready for a change in the power structure.

Teach People to Empower Themselves

When faced with such a threat, old-school leaders hold on even tighter to their power. We’re currently facing the same issue with another client, where a senior leader whose people we are training is circling the wagons to fend off the potential threat to his authority.

We’ve found that projects are the best place to start breaking down the hierarchy.

Because projects tend to be cross-functional in nature, they exist outside the vertical power structure and don’t mess with the day-to-day business.

We train project leaders in leading projects collaboratively, using new power instead of old, as well as in leading teams without authority—especially useful since they rarely have any anyway. We can teach them how to be empowered adults within the context of the project, which begins the shifting process. This stealth approach doesn’t directly threaten the leader steeped in fear of losing his power—and it works.

Eventually, those hierarchical leaders will die off or get fired.

In the meantime, try using collaborative project leadership as a way to sneak in under the radar and to start making change happen.