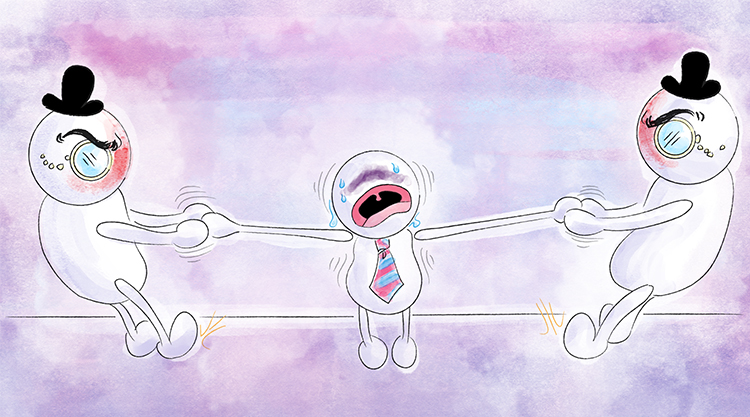 Well, if you guessed they all represent technologies that were popular in the 1970’s and are no longer in widespread use today, you’d be right.

Dual reporting was also a new technology introduced in the 70’s, created to deal with the problem of leaders and workers needing to work outside their vertical, siloed reporting relationships. Those relationships show up on the organizational chart, but in short, it’s a map of who reports to whom – who has authority over whom.

This was way too cumbersome and so a new idea was born. What if you could report to your vertical or functional leader and also to someone in another silo, someone who might be a business partner or an internal customer? For example, if I reported to IT but was leading a large project for the Marketing group, I could have two bosses, my IT leader as well as a Marketing leader.

Lots of organizations thought this was a great idea – a solution to a problem they were all facing, and so they gave it a go. And they tried. But by the 1980’s, the experiment of dual-reporting, AKA matrix management was kaput – deemed a complete failure. It was tossed in the management technology junk pile.

But why? Did they lack the skills to make it work?

Actually, it didn’t work because there is a fatal flaw in the whole idea that you can have two lines of authority in the first place.

If you Google the definition of authority, you get this, “the power or right to give orders, make decisions, and enforce obedience.” So authority is the tool that leaders use to make decisions and delegate those decisions. Major problems occur in a dual-reporting situation when the decisions made by the authority figures are in conflict. Many times, the authority figures are in constant conflict with each other to begin with, and when one demands more attention, there’s no mediator in the middle.

Therefore, the employee is stuck in the middle, constantly being pulled in different directions. These situations are common in dual reporting structures and don’t serve the goals of the organization as a whole.

But fast forward to 2017 and the obsolete, failed management technology, this dual reporting approach that is known as matrix management, has been resurrected. For approximately 10 years, companies have been reinstalling this technology into their organizations.

But why would they do that when the process was clearly a failure?

The Need to Work Cross-Functionally Is Still There

The ability to work cross-functionally is paramount to a company’s competitive advantage today. It’s much stronger than it was 30 years ago as companies now see themselves as more of a network of relationships than what the static org chart portrays.

So the need is real, but the dual reporting solution is still flawed. It’s like bringing back Betamax videotape – sure, you could still use it if you had an old Betamax video player, but why wouldn’t you go digital if you could?

It’s time to upgrade to a new matrix management technology, something we call Matrix Management 2.0™. It’s still about working cross-functionally, but there are way better tools and techniques for making that happen than having someone reporting to two bosses or drawing lots of dotted lines on an organizational chart.

Don’t get me wrong, shifting to a truly horizontal or cross-functional way of working is not easy, which is probably one of the reasons dual reporting has had a resurrection. But for innovative leaders that really want to set their organizations up to succeed and be able to respond to changes in the environment quickly, to provide a base for a culture of innovation, for creating a collaborative culture of success, then the shift is the only way to achieve those results.

Innovative companies are already moving in this direction, so the question becomes, how long do you wait? How many failed restructures are you going to throw time and money at before you realize that isn’t going to solve your fundamental problem?

It Starts with the Leadership Team

What if your leadership team isn’t ready for a big transformation and you’re stuck with this dual reporting approach?

Not to worry – there are several things you can do to make it work better than it did in the 1980’s. Some of the ways to improve organizational and individual functioning in spite of the old matrix management technology include:

The most important aspect is to identify training programs that start your organization in this direction. Dip your toes in the water. I think you’ll find that the water is much more refreshing than you might imagine.

Have questions? We’d be happy to talk with you about what this Matrix Management 2.0™ technology can do for you. Get in Touch with Us